Menu
In The News
General 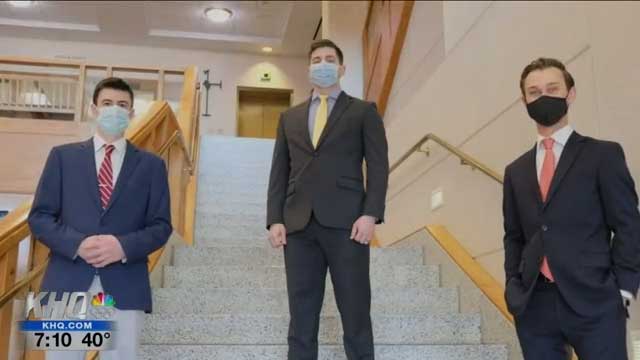 Gonzaga’s reputation of success precedes them and the passion of their fans and students is second to none.

However, their success isn’t only on the court. It’s also in the courtroom.

As many accolades as the basketball team earns, Gonzaga’s Law School is pretty elite in its own right and while the nation has been focusing on the basketball team for the last month, the law school recently competed in the Saul Lefkowitz National Trademark Moot Court Competition.

“What is the Saul Lefkowitz National Trademark Moot Court Competition?” I can hear you asking right now.

“This is, among trademark moot court competitions, this is the one,” third-year Gonzaga Law student and captain of Team Practical Joe Huston said.

“This is the national title,” team member Josiah Alter added while putting the competition into basketball terminology.

Yeah, for these law students, the Moot Court Competition is like their NCAA tournament and the preparation is just as, if not more strenuous.

“It’s almost 9 or 10 months solid work to do this,” Huston said. “We start preparing for this competition the May before we compete.”

Before they hit the courtroom, the students are hitting the library and zoom meetings with their peers, poring through books and law cases.

“It’s a ton of work, but we would not be as refined or as polished without that intensive effort that we do,” Huston said.

This year, just like their basketball peers, the students in Gonzaga’s School of Law dominated.

“They competed at the Ninth Circuit Court of Appeals and both of our teams advanced,” team coach Professor Chris Lynch said. “We swept the region.”

After taking care of business early in the tournament, it was onto the finals in March and they went head-to-head with the law school powerhouses of Notre Dame, Northwestern and Brooklyn Law. The experience allowed the team to go up against the best of the best and gain valuable time in the courtroom.

“The judge that we argued in front of at the national title is the interlocutory attorney, basically the judge in this case I’m arguing in in real life,” Alter said. “So it’s real experience.”

And you know what?

“We ended up walking away with the best brief in the nation,” Huston said smiling.

Yep. A national championship for Gonzaga in March, not for basketball, but for the best brief in the nation!

It may be a bit different than a victory on the court, but I will say the post-game interviews sound very similar.

“We definitely couldn’t have done it without each other, without our coach,” Alter said. “We play as a team. Everybody has their strengths and you kind of go off of each other’s strengths and weaknesses and grow together and I think we did a great job.”

“When you boil down ten months into one competition and it goes so well, it feels really good,” third team member Blake DeVerney added.

Unfortunately, a victory like this doesn’t come with the fanfare, confetti, parades or cutting down the nets, but there was a celebration.

“There was champagne, Cory,” Professor Lynch assured me.